Kessel Run Regatta: Join us at Viridian on an RS Aero this weekend!! The Kessel Run Regatta, hosted by Viridian Sailing Center is this weekend. Registration + Aeros charter is only $115, a screaming deal! Register here: http://www.regattanetwork.com/event/18808 and contact Jack Hattendorf with any questions.

CSC 80th Polos: If you haven’t noticed Corinthian Sailing Club is celebrating its 80th year! It has been awhile since CSC has issued a club polo shirt, we have made special one for the 80th incorporating a special logo. All the fleets at CSC are getting them so they can be in their fleet photo. Fleet Photo? Yes, Fleet Photo! We will have our new polos and have a Laser on a dolly in front of CSC. We want everyone to be in it with the special 80th polos. The polos will be on sale for a limited amount of time via our online store. You will be able to sign up at May’s First Friday Party, all transaction will be done by credit cards. A Few Details: Sizes: S,M,L,Xl,XXL – Colors: Navy Blue or White – Cut: Regular Cut – Fabric: Dry Fit or Cotton.

Even though the lake was flooded, debris abound, and breeze in the 20’s, we managed to get three boats on the water for our first practice day to kick off the Spring Season. Way to go Eric Roman, Forest Atkins, and Griffin Orr for splashing their boats in to enjoy some fun rides! I think Forest was the only one of the three not to go for a swim after a death roll!

We never like to see the lake flood, but a flood when the air is warm does bring up the water temperature which is now nearing 60 degrees. This sets us up very nicely for next week, the first official week of scored racing this year. First gun is at 6:00PM and we will race until dark.

With Daylight Savings this Sunday, we get an extra hour of daylight with the sun setting at 7:30!!! Though this is still early to have scored racing, we will hold practice races next Wednesday, March 13th to get us back in shape and clear all the cobwebs. I am planning to have a rescue boat on the water shortly after 6:00PM, with marks and a horn to set some short courses. Scored racing will begin Wednesday, March 20th, with first Gun at 6:00PM until the days lengthen. If you cannot make it in time for first gun, take your time and join us when you can as we shoot for 3-4 races each night.

Join us on the water tonight for some good fun on the water! Storms have moved out of the area and we are expecting a cool 5-15 knots of breeze out of the south. First gun is at 6:30 and we will race until sunset.

After racing, the fleet will be hosting dinner at the club as we pack boats for the LaserPalooza Regatta this weekend in Arlington. If you have not signed up yet, check out the link here:
http://www.regattanetwork.com/event/17477#_registration

Also if you have questions about getting you boat to Arlington, please just ask Griffin Orr. The fleet will coordinate to make sure that anybody who wants to go can get their boat to Arlington.

There will be plenty of food but please BYOB. See you on the water tonight! 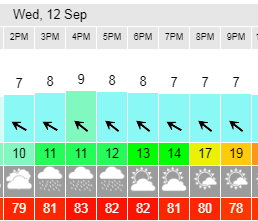 Thirteen boats hit the line last night to enjoy near perfect conditions at the lake.  There were 11 full rigs and two radials being sailed exceptionally well by Aubin and Rachel.

Winds were fairly steady straight down the pipe from the south.  BUT, there were shifts in there, and with courses that had a very long weather leg, it made for good tactical and strategic sailing.

Speed was needed, too, and Chris B. had it in spades, giving up a tad of pointing to get to the next shift.  He sailed his own races, and he was rewarded with four of five firsts on the evening.

Racing in the pack was very close, with some fun mark roundings for the RC to watch.

Speaking of RC, we had Alex as PRO who did a good job making the calls on the course.  The first race was skewed as a big leftie filled in, but things worked out well after that.  He was a bit less stellar on getting participants’ names, so no rundown, but he did a great job running the boat by himself!

Afterwards, Griffin, Tim, Chris, Alex, Eric Ro., Greg, John (back for a few hour layover in Dallas), Forest and Mandy, Porter, and Cindy and Brig (with Angel) hit Lake House.  The young studs who repped in CO had a lively convo regarding their exploits of being out late and still sailing well later in the day(!).  Several Eastern European ladies will be telling stories back home, I am certain….   All in all, a perfect capping of a fun night of sailing.

DLF Sailors Alex G, Tim P, Eric R, and Griffin O braved an 1800 mile drive to sail on Grand Lake, nestled just west of Rocky Mountain National Park at 8,359 feet. The forecast showed for no wind all weekend, but as we drove in on Friday, there was a fresh breeze of about 15 knots from the east, giving us hope that there would indeed be racing. We could not launch our boats to test sail on Friday as they first had to be inspected for invasive species by the Parks and Wildlife Officer, however this did not stop Alex from hijacking a laser from the swim dock, much to the owners delight (As he no longer had to de-rig his boat)

Saturday started with 27 competitors and a breeze that slowly trickled in around 11:00AM out of the southwest. As race 1 started shortly thereafter, it became abundantly clear that the breeze was not going to last, slowly retreating from whence it came. Griffin took advantage of the direction of retreat and took an unfavorable shift to stay in the breeze, sailing twice the distance of his competitors to take a flyer into the weather mark, having gained a substantial lead. The downwind leg would see the wind die completely, with only the powerboat waves propelling the fleet forward. DLF sailors finished 1, 3, and would be 5, but Alex took his shirt off and neglected to put his PFD back on, thus was summarily disqualified.

The afternoon saw the breeze shift 180 degrees and fill in to a fresh 10-15 knots for another 3 races seeing Griffin grab two more bullets, Eric a third, and Alex a second.

After festivities with the local sailors, encounters with two black bears, and some additional acclimating to the altitude, Dallas was ready for day 2!

Day 2 started much the same as Saturday with a dying southwesterly breeze, which gave us two races, the second of which Eric scored a third! We readied up for one last race as the wind predictably shifted 180 degrees and picked up to 10-15 knots. This race was one for the history books!! Griffin started at the pin and Alex at the boat, Griffin played the hard left and Alex played the hard right yet, yet still managed to both meet at the top mark ahead of the fleet with Alex having a 1/2 boat length lead!! Welcome to mountain sailing!! On the downwind leg, Alex picked a fight with a Brit, Griffin played it safe down the middle and Tim found a pocket of breeze that found him passing half a dozen boats. With one last upwind, we had to be sure that Texas left their mark on Colorado and we did with Griffin, Alex, and Tim finishing 1, 2, 3, respectively.

Griffin ended up first in the Regatta and exchanged Burgees with the Grand Lake Yacht Club. Team Texas pledged to return next year with even more boats and also extended invitations to the Colorado sailors to attend Wurst fest or Rock the Ice Regattas. Overall this was a fantastic regatta that none of us will forget and none of you should miss out on attending next year!!

Laserpalooza — Details on this District 15 regatta, to be held the weekend of September 15 and 16 at Lake Arlington may be found here: http://www.regattanetwork.com/event/17477#_registration